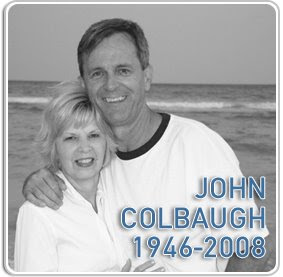 40% of couples, over that fifty-year span will divorce. More and more of them, close to that goal-line. The remainder will see their marriages end by the death of one or more of the spouses.

So kiss your partner and cherish the moments. And weep for those who were so close to the rocking chair and those golden years.

John Colbaugh was a friend. After 41 years of marriage, he went to be with the Lord. He was the pastor of the Lawrenceville Church of God, just north of Atlanta. He had served as the overseer of Kansas and on numerous denominational boards and committees. He was a nice guy – a Christian. And he had a hunger for God. A deep respect for prayer. I had preached for him there in Lawrenceville on several occasions.

We shared in fellowship. I recall his wonderful stories about the years he served in Nashville as pastor to Johnny and June Cash. Johnny Cash remained in contact with John right up to the time of the singer’s death.

John had fought with cancer. Appeared to beat it. Then it returned – and took him. In the last few days, he had walked down memory lane with his wife Gloria. They had rehearsed the good times, sweet memories. He knew he was near the end. He fought a good fight. He finished the course. There is laid up for him a crown of life.

Tragically, his wife’s sister lost her husband, Billy O’Neal just last week. Billy’s death was completely unexpected. He simply did not return from a ministry trip. A head-ache was the only sign of impending death. He was found dead in his hotel room the next day.