Obama’s Hope! In What? 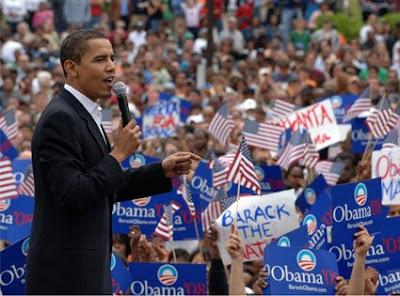 Barack Obama is like lightning! How he dazzles a crowd. He is more preacher than politician. His message is hope. He burst on the national scene when he delivered his “audacity of hope” speech at the Democratic Convention in 2004. In 2006, he published a book with the same title. From its text have come dozens of his often repeated speeches in which he invokes the virtue of hope, sometimes dozens of times.

“There is one thing I know,” he told a crowd over the weekend, “Nothing worthwhile in this country has ever happened, except when somebody somewhere was willing to hope.” The message is evoking a powerful effect, creating a quasi-religious belief in a brighter tomorrow. The Jamaican Gleaner said, “Like Obamian hope, biblical hope knows that the present is just a platform on which the future is being built … Fundamentally, the similarities between Obamian hope and biblical hope are extraordinary, striking and intriguing. Like biblical hope, Obamian hope inspires the United States of America and the world.”

But there is a difference. Biblical hope is tied to historical events, and projected on the future. On what record and for what promise do Obama’s followers hope?

G.K. Chesterton’s essay, “The Hopeful One,” relates a letter to the editor from a man promoting abortion and sterilization as the solution to poverty. The man, Chesterton noted, “had the horrible playfulness to sign his letter ‘hopeful.'” Chesterton did not suggest that the man was not a man of hope. Rather, he argued that he was hopeful for the wrong reasons. It was a hope built on “…the mutilation of womanhood and the massacre of men unborn.” Yet, Chesterton says, he signs himself “Hopeful.” If the means to the end were changed, if the small wage earner’s prospects were raised and thereby we could solve poverty – without abortion or sterilization, what would the man say? On that prospect, the same man signs himself “Hopeless.”

If what we “hope for” involves compromises that twist and distort our national moral character, that sacrifices some for others, that destroys the character of our soul, then such hope is no hope at all – it is counterfeit hope, it is an expensive and empty hope that we will die regretting. With a bag of gold, we will starve for national integrity and weep over the loss of our soul.

The mere use of the term “hope” doesn’t mean its underlying implications are inherently positive or good. The end doesn’t justify the means. Academics want us to “define the terms” we use. Someone must demand of our politicians, “Please define your terms!” By what means do we arrive at this magical land called “Hope!” What will it cost us? What and who might have to be sacrificed to get us there?

In 2004, Obama said, “In the end [hope] is God’s greatest gift to us, the bedrock of this nation.” Quoting Hebrews, he called hope “a belief in things not seen.” But when pressed to clarify “the unseen things,” the politician falters. Reaching back to the to the pilgrims on the Mayflower who believed in the unseen New World, in the colonies who believed for an unseen independence, in slaves who believed in freedom, and in American soldiers in WWII who believed in an unseen victory – his reflective rhetoric inspires, but it does not offer a clear vision of where he wants to take the nation.

He is a masterful communicator. And yet, he offers no clear and precise decisive vision, rather there is “a fuzzy, comforting obscurity.” Good at rhetoric, he fails at his own game – failing to give us the words that paint a vision of the America he would create. It should be compelling clear by now that the good man doesn’t have a very clear idea himself of the change he hopes to bring.

His rhetoric stirms emotions, heightens positive feelings, makes us feel like our team can whip the national champions. He is a great “pep-rally” leader. But in the end, it is to our hearts that he speaks, not our heads. Toying with the electorate’s emotions, there are no concrete solutions. A journey through the pages of his book, “The Audacity of Hope,” will reveal very few, definite ideas. His highest ideal seems to be that of “empathy.”

American’s seems dizzy with his dazzling rhetoric. When you pour into the heart of the policy proposals you might conclude that the hope here is much the hope of Chesterton’s letter writer – empty hope, woeful hope. In the past, he has opposed legislation that would have told doctors to treat babies that survive abortion and are born alive. His advocacy of “choice” is code-word for his leftist position on abortion rights. He believes that the “worst mistake” of his career was voting to give Terri Schiavo a last chance at life. His desire for “progress” is lauded by gay-rights activist, since he has pledged to fight for their cause. He is unequivocally and unapologetically supportive of homosexuality, abortion, embryonic stem cell research. He will not find much bipartisan cooperation on these issues. He is for universal healthcare. He seems to have out-liberaled the liberals.

For his talk about bipartisan cooperation and finding common ground between conservatives and liberals, his Senate record places him at the far left of the political spectrum, hardly a position from which one can create common ground. He does not have a track record of initiatives that unite parties. When Ted Kennedy is conservative in comparison to anyone, you have to wonder how far left is this Illinois Senator? Already, he has alienated so-called “moderate” factions of the conservative movement. His politically charged far-left church calls into question any real understanding of evangelical, heart-felt faith.

Christopher Hitchins, no friend of conservative Christians, seems to be fed up with the rhetoric. Hitchins decries “bumper sticker politics” using only ten keywords: “Dream, Fear, Hope, New, People, We, Change, America, Future, Together.” Such superficial dialogue is likely to “drive all thinking people away from the political arena and leave matters in the gnarled but capable hands of the professional wordsmiths and manipulators.”

Obama’s engages in the politics of oversimplification. Capitalizing on the positive connotations of words skillfully employed, “he has driven sober thinking from the political process, and has introduced a politics of emotion at which he excels more than any other candidate. For this reason, he may be the most dangerous candidate seeking the presidency.”

Adapted from an article by John Jalsevac of LifeSiteNews