We are constantly told by the “balanced and well-informed” media of our nation that Islam is a “peaceful religion” which should not be besmirched by the few radical extremists. 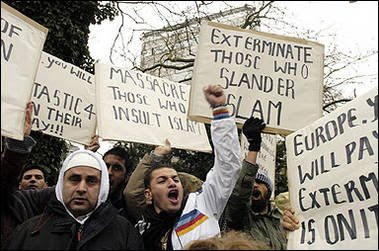 Such a message, consistently given to the American public, is a form of brainwashing. After a season, one is supposed to repeat the mantra, and thereby establish the new way of thinking as the majority opinion. Then, anyone who dissents, is sternly reprimanded. After all, we have heard the mantra so often, how could we believe anything else.

Thank God for some who dare to challenge such conformists efforts.

In a study by John Thorne and Hannah Stuart from the Centre for Social Cohesion, they focused on Islamic students, not in the middle east, but in the United Kingdom. Islam on Campus is the most comprehensive survey ever undertaken of Muslim student opinion in Britain. The poll was specially commissioned by YouGov and involved 1400 students, fieldwork and interviews. The majority of Muslim students’ appear to support secularism and democratic values. They mouth tolerance towards other groups. And they even reject violence in the name of their faith. But probing deeper, different values emerged.

religion. The reasons included violence to protect the faith if it was under attack. One out of 25 (4%) said that killing was justified in order to promote or further the cause of the Muslim religion.

Muslim students who were active members of campus-based Islamic societies were more inclined to violent attitudes. Sixty percent (60%) of them said killing in the name of the faith was justified. While academics champion freedom of thought, half (50%) of Muslim students would not be supportive of a friend’s decision to abandon Islamic faith and practice.

One of four do not see men and women was equal in the eyes of Allah. Females more than males sense inequity in treatment. Nearly three fifths (59%) of Muslim students felt

that Muslim women wear the hijab.

Forty-percent want Sharia law introduced as an alternative to British law for Muslims. One-third support a worldwide Caliphate based on Sharia law. Those active in campus Islamic societies were more radical, there the number supporting sharia law rose to 58%.

Twenty-five percent of the students in campus Islamic societies believed that Islam as a religion and a political ideology were the same thing. Over half of Muslim students favored (54%) an Islamic political party to represent the views of Muslims at Parliament. Yet, not even half believe that Islam can ever be compatible with secularism.

Fifty-seven percent said that Muslims should be allowed to opt out of taking part in military operations if they involved a Muslim country.

“These findings are deeply alarming,” said one of the authors of the report, researcher Hanna Stuart. “Students in higher education are the future leaders of their communities.” The study notes the striking difference between in those who join on-campus Islamic groups. In such circles “opinions are significantly more extreme. ”

The implications of the study are sadly marginal – encourage democratic Muslim voices and sideline intolerant voices. In a harder line, “the study suggest that University authorities need to urgently take steps to reduce Islamist influence on campus,” said Center director Murray. One of the researchers conceded, significant numbers of Islamic students “appear to hold beliefs which contravene liberal, democratic values. In addition, there are signs of growing religious segregation on campus. These results are deeply embarrassing for those who have said there is no extremism in British universities.”

You decide. With these values, can any nation expect social cohesion?