Pastor Jerry Madden, who leads Praise Cathedral in Greer, SC has a Barnyard Ministry, more correctly, a Barnyard Flea Market ministry. No small church, a thousand or more worshippers crowd into the impressive gathering every Sunday. Great singing. Terrific preaching. Good people. Wonderful fellowship. He sent me a report of a recent Saturday in which a prayer team set up shop at the local flea market – what a story. What a great idea!

After training on Friday evenings, a group of prayer leaders head for space A17. On a typical Saturday, they will go through dozens of Gospels of John. They will pray with 70-80 people. They rarely get a rude remark. People seem genuinely excited that they would take the time to pray with them. Sometimes the folks who stop for prayer cry openly. Some experience the drawing conviction of God. Some volunteer that have drifted from the Lord, and need to return. “I was on fire for the Lord, but I have drifted away. This Prayer Station has touched my heart.” 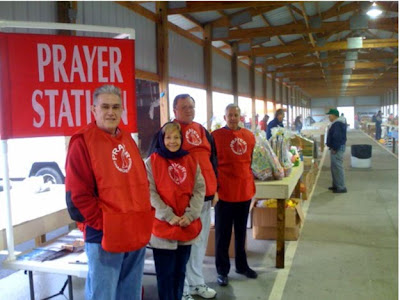 The folks who go to give the gift of prayer – they get the greatest blessing. Some say they are more excited about this outreach than any other thing they have ever done. They are often moved by the pain they find in the lives of others – so many hurting people are all around us. A sample of the transparent prayer needs shared with them include:

How extraordinary that people would share such personal needs. When friends seem closed to witness, they are often open to prayer. When words will not convince them, prayer will open them up to the loving presence of a pursuing God who will reveal himself to them.

Give the gift of Prayer!

A Snapshot of America’s Colleges and Identity Politics
July 15, 2020