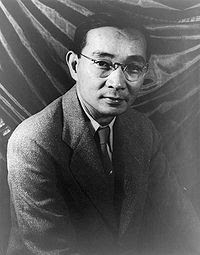 This morning, during my prayer time, I found myself considering the conversions of significant people – Wesley, Livingston, John Newton, and more. One story stood out. The conversion of Lin Yutang. He was raised in China by Christian parents. Once out of the small valley, enrolled in college to prepare for ministry, his little world exploded. The sheltered innocent world was invaded by Chinese Folk Religion, Humanism, Buddihism and more. Overwhelmed, he abandoned his faith. Perhaps influenced by Confucianism, he developed a rather self-sufficient, the ‘human-can-do’ view of life.

In 1937, he published a groundbreaking book, “The Importance of Living!” It was an instant best-seller, particularly in the West. It is often considered the grand-daddy to self-help books and a seed-bed for humanistic philosophy. He studied at Harvard, and became a internationally known atheist – a prize who had been a believer, but had “come to his senses.”‘
Then, accommodating his wife to the Madison Avenue Presyterian Church one Sunday, he heard a message that changed it all. His wife had encouraged him to come along, declaring that though he might not agree, the speaker was stimulating and inspiring. Eternal Life, the pastor said was not merely an extension of this life, it was not purely quantity. It was a kind of life that could be grasped here, one that was both full of meaning and noble, a quality of life that should not die, that was worth being continued for eternity! Such life deserves to be eternal. And that life, the pastor said, was evidenced in the kind of life lived by Jesus Christ.
I did not see the Bill Mayer, Bill O’Reilly exchange last night. I am sure it was more of the same. I am becoming convinced that we are arguing over the wrong thing, noble things – evolution, the nature of sin, homosexuality, the nature of marriage, nuclear proliferation, should a Christian be green? But the real question, the bottom line is – Consider Jesus! What will you do with Jesus? Put him up on the stage – and he inspires, convicts, proves incomparable!
Category: CommentaryOctober 1, 2010
Share this article
Share with LinkedInShare with FacebookShare with Google+Share with WhatsAppShare with TwitterShare with Pinterest