They are coming for us!

As the culture began to radically change several decades ago, and the schools chose to no longer honor or reflect either the values of a community or parents, Christians, and not a few who were not Christians, began to withdraw their children from public schools to protect them from that harsh environment and their growing liberal trends. At first, the trend was to place these kids into private schools. Then growing numbers of parents chose to educate their children at home.

There were liberal voices who objected, sounding the cry that the children belonged to the state and that such a choice should not be left to parents.

Increasingly, the liberal community has worried about the huge numbers of kids who were being reared by conservative and religious parents. Actually, the concern is over the alarming number of children who were not being socialized to the liberal thinking of the new anti-Christian cultural norms. So, there have been attempts to reign in the movement, to require reporting, testing, home inspections, and to insist that parents were not qualified to teach, that the action constituted a kind of child neglect, if not abuse. The difficulty with that argument is that home schoolers consistently outperform their public school counterparts, not to mention that their behavior problems are minimal in comparison.

All that doesn’t matter.

Now, the California court system has stepped into the fray. A three-judge panel of the California Court of Appeals has determined parents in that state have no legal right to home school their children. A Christian attorney in Sacramento says unless the ruling is reversed, literally thousands in the Golden State will be subject to criminal sanctions.

“Ah, but this is America,” says the sleeping Church! “That ruling will be reversed! Don’t worry.” Already in Europe, and in even in Brazil, of all places, parents who choose to home school their children are facing charges. Some have become fugitives, choosing to live on the run and hold on to their children.

Who owns the children? The parents or the State? Neither. They belong to the Lord. 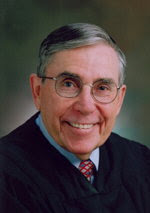 That is not the view of California Justice H. Walter Croskey (image at right) who has stated in the California judicial opinion that “parents who fail to [comply with school enrollment laws] may be subject to a criminal complaint against them, found guilty of an infraction, and subject to imposition of fines or an order to complete a parent education and counseling program.”

Did you catch that? A “parent education and counseling program.” What we are really talking about here is a cultural compliance program run by the liberals to force compliance of thought and conformity to the new social norms. And if such parents fail the test? The implications are clear.

So, the fight has really begun. What will it take to wake up the church? Do the state police have to show up at our door?

The opinion of Justice Croskey was issued in the case of one family who enrolled their daughter in Sunland Christian School, a private home-schooling program based in Sylmar. An earlier opinion from a Superior Court that found that “parents have a constitutional right to school their children in their own home.” In his reversal, Croskey refers to the “ruse of enrolling [children] in a private school and then letting them stay home and be taught by a non-credentialed parent.”

Brad Dacus, president of the Sacramento-based Pacific Justice Institute, calls the scope of the decision “breathtaking!” The ruling attacks traditional home schooling. It also calls into question creative cooperatives between home schoolers and charter schools, and the use of home-based independent study in connection with private, and even public schools. It is a sweeping ruling, aimed at disempowering parents. Judicial activism is the persistent attempt of liberal judges in ideological collusion with liberal attorneys, to constrain and shape social norms into liberal molds. Even though, the U.S. Supreme Court has already recognized that parents have a fundamental right over the education of their children, such activism continues. And, given the history of this kind of legal battering of the conservatives in the culture, it will continue until the law is changed. Here is a liberal judicial panel, defying the Supreme Court, and over-ruling the lower-court judge in this same decision who actually ruled that these parents had a constitutional right to home school their children. Obviously out of step with courts below and above, their goal is not affirmation of the legal standard, but the alteration of it to their own bent predisposition.

I wish we were as determined as they are!